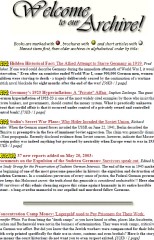 Hidden Historical Fact: The Allied Attempt to Starve Germany in 1919. Fred Blahut. If one word could describe Germany during the immediate aftermath of World War I, it would be "starvation." Even after an armistice ended World War I, some 900,000 German men, women and children were starving to death - a tragedy deliberately caused by the continuation of a wartime British naval blockade for eight months after the end of the war ! ...