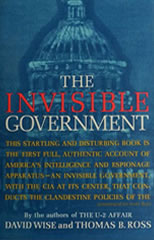 The Invisible Government. There are two governments in the United States today. One is visible. The other is invisible. The first is the government that citizens read about in their newspapers and children study about in their civics books. The second is the interlocking, hidden machinery that carries out the policies of the United States in the Cold War. This second, invisible government gathers intelligence, conducts espionage, and plans and executes secret operations all over the globe. ...