« Edgell William - Does the Earth rotate ? No ! - Quinlan John Edward - The Earth a plane » 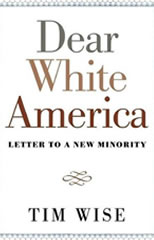 Note to reader. Believe me, I know there is something more than a little pretentious about penning a letter to what amounts to roughly 200 million people. To begin, I realize that only a tiny fraction of that number will ever read it or learn of its existence. Of those, a disproportionate percentage will be persons who likely hold views similar to my own. Such is the nature of ideological polemic. It tends to find readership amongst those already predisposed to agree with the bulk of its contents, thereby missing the vast throngs of others who could perhaps benefit from those contents but will studiously avoid them precisely because they can tell—perhaps from the title or the jacket blurbs, or because they are already familiar with the author—that they won’t likely agree with much of what lies inside. I also recognize that by aiming said polemic at a group as vast and diverse as “white America,” I will likely be accused of overreach. After all, how can one speak at once to 200 million people called white in this nation, who lead lives that vary based on geography, class status, gender, sexuality, religious affiliation, political ideology, and any number of other identity categories? Doesn’t such an effort overgeneralize about white people, suggesting that there are things they all need to think about, are not thinking about now, and on which I am qualified to lecture? Perhaps. But despite these caveats, I believe this effort to be a valuable one. First, even if most who read this letter are already of a progressive, liberal or left orientation, the contents may still be of assistance in conversations with others of decidedly different persuasions. We all have people in our lives with whom it can be difficult to talk about political matters, and especially when those matters touch on the always explosive topic of race, as this volume does. If my words may in some way strengthen your own, and allow you to more confidently discuss racial subjects with those difficult co-workers, relatives, neighbors, or friends, all the better. Sometimes efforts such as this are aimed less at those one seeks to “convert” than at those with whom one already sojourns in general agreement, but who need reinforcement for the struggle. Not to mention, those who make up the so-called “choir” are often not singing on key, certainly not nearly so much as they believe themselves to be. As a lifelong Southerner who has been around my fair share of choirs, I can say without fear of contradiction that choirs need practice. ...

« Edgell William - Does the Earth rotate ? No ! - Quinlan John Edward - The Earth a plane »