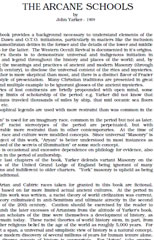 This book provides a background necessary to understand elements of the Golden Dawn and O.T.O. initiations, particularly in matters like the inclusion of the Samothraian deities in the former and the details of the lower and middle degrees for the latter. The Western Occult Revival is documented in it's origins. Yarker's thesis is to demonstrate universal and indigenous initiation in symbol and legend throughout the history and places of the world; and, by relating the meanings and practices of ancient and modern Masonry (through the 19th century), to disclose the universal content of the rites and mysteries. The author is more skeptical than most, and there is a distinct flavor of Frazier in the style of presentation. Many Christian traditions are presented in great detail and multiple example to be ignorant glosses of the ancient mysteries. Theories of lost continents are briefly propounded with open mind, some dated by limits of scholarship of the period: e.g. Yarker did not know that Polynesians traveled thousands of miles by ship, that mid oceanic sea floors spread, etc. Theosophical legends are used with more restraint than was common in the period. "Aryan" is used for an imaginary race, common in the period but not as later. "Learned" racist stereotypes of the period are perpetuated, but with considerable more restraint than in other contemporaries. At the time of writing, race and culture were muddled concepts. Since universal "Masonry" is the subject of this work, "Aryan" is better understood in most instances as "possessed of the secrets of illumination" or some such concept. There is occasional and excessive dependence on philology for evidence, also common in the period of authorship. In the last chapters of the book, Yarker defends variant Masonry on the grounds of the United Grand Lodge of England being ignorant of many traditions and indifferent to older charters. "York" masonry is upheld as being more traditional. ...