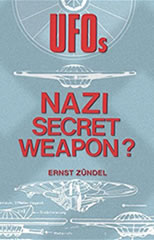 Forword. Ever since the fall of Berlin and the unconditional surrender of the German armed forces in 1945 one continually reads of Adolf Hitler’s possible or definite escape from Berlin and Germany. Hitler has been reported to be living in several inaccessible spots in South America, in some well-guarded Shang-rila surrounded by S.S. Guards armed to the teeth. He is supposed to have spent some time in a monastery in Spain and other reports have him as a “prisoner” in Russia, itself. Millions of words have been written and spoken to this effect. Over 100,000 books have been written about Hitler and W.W. II in most major languages of the world. Most of them were more or less fictional accounts and re-hashes of the official propaganda lines and clichés of the military victors of W.W. II. None of these studies were deep or exhaustive enough to be considered conclusive. Many very important facets were not covered at all or were only touched upon the fringes. The book that is before you, is to the knowledge of the authors, their collaborators and to the publishers as well, the first attempt to cover some of these fringe issues in more depth. Consequently, they have drawn some very different conclusions to those already written on this vast and complex topic. In order to start on a sound footing, and ultimately to do it justice, Hitler, the man is examined. Hitler, the thinker, the statesman, the politician and above all, Hitler the founder of the National Socialist Ideology (Weltanschauung) is examined in greater detail and in a more dispassionate manner. To only write about the technical aspects and ratifications of the UFO mystery, of the UFO’s purely military potential, would, of necessity, lead to incorrect conclusions To separate the totality of Hitler’s control and influence over the production and eventual use of the UFO’s and over every other secret development of the II Reich would be stupid. Without Hitler’s backing or his knowledge of their potential uses, no weapons, not even the UFO’s would have been developed; they would have been condemned to the “planners’ morgue” or the junk piles. Hitler knew about the research work being done on UFO’s by his scientists, just as he knew about the other incredible secret weapons they were feverishly working upon in their bomb-proof laboratories. Many of these highly sophisticated weapon systems represented scientific breakthroughs of great importance. Many of these devices fell into Allied hands and they are pictured here for the first time and to the best of our knowledge. Others are re-created from engineering drawings or from testimony given to the Allied interrogators. There is a whole array of jet and rocket-powered aircraft, both fighters and bombers. There are T.V. guided missiles and torpedos. There are plane and submarine-based rockets. Also there are wind cannons and many other devices. ...