« Porter Carlos Whitlock - Satires - Zoller Israel Anton - At the root of it all... » 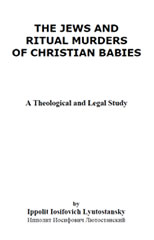 Author’s Revelation. Although I published a study of the Talmud, and a theological and legal study of the ritual murders of Christian babies by the Jews, I am not their enemy, but rather I pity them. For this reason, I ask my Christian Orthodox brothers not to nourish feelings of hatred and malice towards the Jews, and particularly to refrain from violent and arbitrary reprisals. I recommend them to act according to the words of (Ion C.) Bratianu, a clever Romanian minister, who reproached the Romanian people for carrying out a Jewish pogrom. Bratianu said: “Do not commit any violence or pogroms against the Jews, for it would only harm you. Instead, create solidarity among yourselves so as not to buy anything from the Jews, or sell anything to them, or take service with them. Then, even if you wanted to make them stay, they would run away from you.” A new edition of our books is an absolute necessity for crime investigation commissions. This is shown by the Vilna case involving a Jew named Blondes, who was accused of forcibly drawing blood from a Christian girl in 1900, and who was eventually convicted. The Public Prosecutor of the Judicial Court, as he investigated the case, searched for our book On the Use of Christian Blood by Jewish Sectarians in the whole of Vilna, offered 100 rubles for it, but was unable to find the only legal study available in Russia that sheds light on ritual murders perpetrated by Jewish fanatics since the early centuries of the Christian epoch and up to the most recent times. We can name fourteen cases which took place (between 1890 and 1900), where the Jews were accused of using Christian blood, beginning with the famous story that occurred on the island of Corfu in 1891, and ending with the Konitz trial and the Polna trials. Ritual murders have recently produced a whole literature in Germany. Those who wish to familiarize themselves with this issue are referred to the first volume of our book On the Use of Christian Blood by Jewish Sectarians, which contains a German bibliography on ritual murders for 1890 to 1900. ...

« Porter Carlos Whitlock - Satires - Zoller Israel Anton - At the root of it all... »