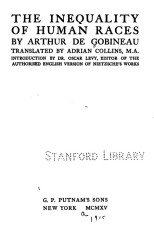 Though many people have accused this age of irreligion, there is at least one point of similarity between modern Europe and that pre-Christian Era to which our present religion is due. Just as in ancient Palestine, there are living amongst us two kinds of prophets—the prophets of evil and disaster, and those of bliss, or, as Europe likes to call it, of " progress." As in Palestine of old the public usually sides with the lighter, the optimistic, the more comfortable sort of people, with the prophets of bliss, while Time and Fate invariably decide in favour of the sterner and gloomier individuals, the prophets of evil. In the world to-day as well as in Palestine of old, the prophets of bliss are the false prophets ; the prophets of evil, to-day as of yore, are the true ones. Such a true prophet was Count Arthur de Gobineau. Even his friends—those few friends whom he gained at the end of his life—still thought him unduly pessimistic. Old Wagner, who introduced him to the German public, thought of brightening his gloom by a little Christian faith, hope, and charity, in order to make the pill more palatable to that great public, which he, the great Stage-manager, knew so well. Other Germans—Chamberlain, Schemann, and the Gobineau school — poured a great deal of water into his wine, sweetened it with patriotic syrups, adulterated it with their own pleasant inventions, which were all too readily swallowed by a gullible and credulous generation. But stern old Gobineau knew the world better than his young and cheerful offspring. He had seen through all that boisterous gaiety of the age, all its breathless labour, all its technical advancement, all its materialistic progress, and had diagnosed, behind it that muddle of moral values which our forefathers have bequeathed to us and which in our generation has only become a greater muddle still. The catastrophe which Gobineau had prophesied to an Aristocracy which had forgotten its tradition, to a Democracy which had no root in reality, to a Christianity which he thought entirely inefficient, is now upon us. Under the stress of the present misfortunes, we frequently hear that all our previous opinions need revision, that we have to forget many things and to learn afresh still more, that we must try to build up our civilization on a safer basis, that we must reconsider and re-construct the values received from former ages. It is therefore our duty, I think, to turn back to those prophets who accused our forefathers of being on the road to destruction, all the more so as these prophets were likewise true poets who tried as such to point out the right road, endeavouring to remedy, as far as their insight went, the evil of their time. This is the best, and I trust a perfectly satisfactory, reason for the translation of " The Inequality of Human Races." This book, written as early as 1853, is no doubt a youthful and somewhat bewildering performance, but it gives us the basis of Gobineau's creed, his belief in Race and Aristocracy as the first condition of civilization, his disbelief in the influence of environment, his distrust in the efficacy of religion and morality. The latter kind of scepticism brings him into relationship with Nietzsche, who has even accentuated Count Gobineau's suspicions and who has branded our morality as Slave-Morality, and consequently as harmful to good government. What a Europe without Masters, but with plenty of Half-masters and Slaves, was driving at, Gobineau foresaw as well as Nietzsche. I sincerely hope that no intelligent reader will overlook this sceptical attitude of Gobineau towards religion, because that is a point of great importance at the present time, when our faith will certainly thrive again on a misfortune, which, by the propagation of slave-values, it indirectly has caused. It is this scepticism against the Church and its Semitic values, which separates a Gobineau from Disraeli, to whom otherwise—in his rejection of Buckle, Darwin, and their science, in his praise of Race and Aristocracy, and in his prophecy of evil—he is so nearly related. Disraeli still believed in a Church based upon a revival of the old principles, Gobineau, like Nietzsche, had no hope whatever in this respect. It is the great merit of both Nietzsche and Gobineau, that they were not, like Disraeli, trying to revive a corpse, but that they frankly acknowledged, the one that the corpse was dead, the other that it was positively poisoning the air. The occasional bows which Gobineau makes to the Church cannot, I repeat, mislead any serious critics of his work, especially if they likewise consult his later books, about which, by the way, I have spoken at greater length elsewhere.* Both Spinoza and Montaigne had the same laudable habit, and they did not mean it either. For the first business of a great freethinker is not to be mistaken for a little one ; his greatest misfortune is to be "understood " by the wrong class of people, and thus an occasional bow to the old and venerable Power—apart from the safety which it procures—protects him from an offensive handshake with enthusiastic and unbalanced disciples and apostles. OSCAR LEVY Geneva, July 1915 ...