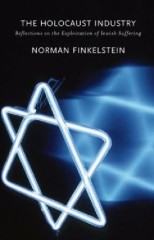 INTRODUCTION. This book is both an anatomy and an indictment of the Holocaust industry. In the pages that follow, I will argue that "The Holocaust" is an ideological representation of the Nazi holocaust.1 Like most ideologies, it bears a connection, if tenuous, with reality. The Holocaust is not an arbitrary but rather an internally coherent construct. Its central dogmas sustain significant political and class interests. Indeed, The Holocaust has proven to be an indispensable ideological weapon. Through its deployment, one of the world's most formidable military powers, with a horrendous human rights record, has cast itself as a "victim" state, and the most successful ethnic group in the United States has likewise acquired victim status. Considerable dividends accrue from this specious victimhood — in particular, immunity to criticism, however justified. Those enjoying this immunity, I might add, have not escaped the moral corruptions that typically attend it. From this perspective, Elie Wiesel's performance as official interpreter of The Holocaust is not happenstance. Plainly he did not come to this position on account of his humanitarian commitments or literary talents.2 Rather, Wiesel plays this leading role because he unerringly articulates the dogmas of, and accordingly sustains the interests underpinning, the Holocaust. ...