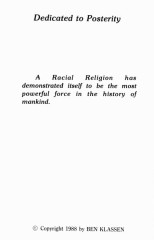 Prelude. Now that I am into the 69th year of my life and attempt to retrace the early glimmerings of my racial consciousness, my memories go back a long, long way. Since everyone is a complex composite of their innate personality, the traditions of his or her people and their own personal experiences, it is interesting to speculate how destiny has helped shape our philosophy of life. Perhaps I should start with my earliest recollections as a child of three or four, when still in Russia, where I was born and where it all started. I recall my Mennonite parents talking about Bolsheviks and Mensheviks, about famine and hunger, about Stalin and Trotsky. I also recall that during this revolutionary period our hapless Mennonite colony on the Molotschna river in the southern Ukraine was subject to repeated ravages and attacks by robber brigands on horseback. These brigades of brigands called themselves Mahknovskys, a name derived from a notorious criminal called Mahknov whom the Communists had released so that he could carry on his effective campaign of devastation on an already war-torn and devastated countryside. Be that as it may, my family and 1 left that chaotic and communist ravaged country in May of 1924, when I was six years old. Not being allowed to enter our first choice, the United States, (immigration laws still meant something then) we settled for Mexico, and specifically, located out in the wide open spaces in the State of Chihuahua. Here, at a rancho hacienda that consisted of a railroad watering station and two adobe buildings in the middle of a vast ranchero, my father and four other Mennonite families attempted to start life anew and begin a small settlement. The five families moved into the one flat-roofed adobe building that had exactly five rooms with dirt floors. Mexican railroad maintenance workers lived in the other building nearby. The one amenity we had was plenty of fresh water from the nearby water tower utilized by passing trains. ...