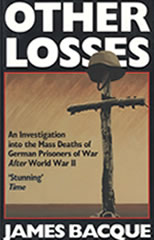 The worst sin towards our fellow creatures is not to hate them but to be indifferent to them; that's the essence of inhumanity. George Bernard Shaw, The Devil's Disciple. Foreword OVER MOST OF THE WESTERN FRONT in late April 1945, the thunder of artillery had been replaced by the shuffling of millions of pairs of boots as columns of disarmed German soldiers marched wearily towards Allied barbed wire enclosures. Scattered enemy detachments fired a few volleys before fading into the countryside and eventual capture by Allied soldiers. The mass surrenders in the west contrasted markedly with the final weeks on the eastern front where surviving Wehrmacht units still fought the advancing Red Army to enable as many of their comrades as possible to evade capture by the Russians. This was the final strategy of the German High Command then under Grand Admiral Doenitz who had been designated Commander-in-Chief by Adolf Hitler following Reich Marshal Goering's surrender to the west. From the German point of view this strategy delivered millions of German soldiers to what they believed would be the more merciful hands of the Western Allies under supreme military commander General Dwight Eisenhower. However, given General Eisenhower's fierce and obsessive hatred not only of the Nazi regime, but indeed of all things German, this belief was at best a desperate gamble. More than five million German soldiers in the American and French zones were crowded into barbed wire cages, many of them literally shoulder to shoulder. The ground beneath them soon became a quagmire of filth and disease. Open to the weather, lacking even primitive sanitary facilities, underfed, the prisoners soon began dying of starvation and disease. Starting in April 1945, the United States Army and the French army casually annihilated about one million men, most of them in American camps. Not since the horrors of the Confederate-administered prison at Andersonville during the American Civil War had such cruelties taken place under American military control. For more than four decades this unprecedented tragedy lay hidden in Allied archives. Howat last did this enormous, lar crime come to light? The first clues were uncovered in 1986 by the author James Bacque and his assistant. Researching a book about Raoul Laporterie, a French Resistance hero who had saved about 1,600 refugees from the Nazis, they interviewed a former German soldier who had become a friend of Laporterie in 1946. Laporterie had taken this man, Hans Goertz, and one other, out of a French prison camp in 1946 to give them work as tailors in his chain of stores. Goertz declared that "Laporterie saved my life, because 25 percent of the men in that camp died in one month." What had they died of? "Starvation, dysentery, disease." Checking as far as possible the records of the camps where Goertz had been confined, Bacque found that it had been one of a group of three in a system of 1,600, all equally bad, according to ICRC reports in the French army archives at Vincennes, Paris. Soon they came upon the first hard evidence of mass deaths in U.S.-controlled camps. This evidence was found in army reports under the bland heading "Other Losses." The terrible significance of this term was soon explained to Bacque by Colonel Philip S. Lauben, a former chief of the German Affairs Branch of SHAEF. In the spring of 1987, Mr Bacque and I met in Washington. Over the following months we worked together in the National Archives and in the George C. Marshall Foundation in Lexington, Virginia, piecing together the evidence we uncovered. The plans made at the highest levels of the U.S. and British governments in 1944 expressed a determination to destroy.Germany as a world power once and for all by reducing her to a peasant economy, although this would mean the starvation of millions of civilians. Up until now, historians have agreed that the Allied leaders soon canceled their destructive plans because of public resistance. Eisenhower's hatred, passed through the lens of a compliant military bureaucracy, produced the horror of death camps unequaled by anything in American military history. In the face of the catastrophic consequences of this hatred, the casual indifference expressed by the SHAEF officers is the most painful aspect of the U.S. Army's involvement. Nothing was further from the intent of the great majority of Americans in 1945 than to kill off so many unarmed Germans after the war. Some idea of the magnitude of this horror can be gained when it is realized that these deaths exceed by far all those incurred by the German army in the west between June 1941 and April 1945. In the narrative that follows, the veil is drawn from this tragedy. DR. ERNEST F. FISHER JR., COLONEL ARMY OF THE UNITED STATES (RETIRED) ARLINGTON, VIRGINIA, 1988. ...