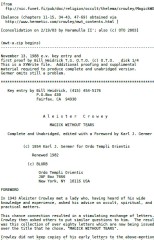 FOREWORD. In 1943 Aleister Crowley met a lady who, having heard of his wide knowledge and experience, asked his advice on occult, spiritual, and practical matters. This chance connection resulted in a stimulating exchange of letters. Crowley then asked others to put similar questions to him. The result was this collection of over eighty letters which are now being issued over the title that he chose, "MAGICK WITHOUT TEARS". Crowley did not keep copies of his early letters to the above-mentioned lady, so was unable to include them in the collection that he planned to publish. Fortunately they have been preserved and are now included in the introduction to this book. Their original form has been retained with the opening and closing formulae which Crowley used in all his letters. Crowley at first intended to call the book "ALEISTER EXPLAINS EVERYTHING", and sent the following circular to his friends and disciples asking them to suggest subjects for inclusion. ALEISTER EXPLAINS EVERYTHING. ...