Rahn Otto - The court of Lucifer 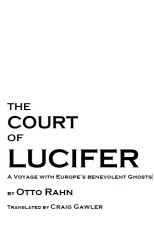 DEPARTURE. He who loves his country, should also wish to understand it He who wishes to understand it, should try at every turn to penetrate its History. Jakob Grimm n the beginning, this book was simply a journal, begun in Germany, continued in France’s Midi region and completed, provisionally, in Iceland. I might have ended it there, as the experience of the midnight sun had brought to light the essence of the perfect sphere within which my thoughts and acts, bound by very precise rules, had been evolving. I I acted as an artist who, piecing together a mosaic, first gathers the different coloured pieces one by one, then places them, beginning to sketch out his work. I gleaned intuitions and knowledge under multiple skies and in different countries. From their convergence, leapt an impression of the whole. In excising, capping or emphasising, I built up my Journal, regrouping separate pages, so that the image I had in mind might be understood, mulled over and animated by others. I hope, in this, my hand has been fortunate! I wrote this book in my little village of High Hesse. From my work-desk, I could make out an infinitely extending landscape, one extremely dear to me and towards which my mind would often return whilst my destiny swept me off across strange deserts and lands. High Hesse, country of my fathers. In this village, standing on the wooded highs which seems to close up the country to the south, they have, since the most distant past, tilled the earth, struck the anvil, ground wheat to make flour or laboured to make cloth cloth in low-ceilinged rooms. The ground of this land is very stony and its sky is often obscured by clouds. Rare are those from here who have made a fortune. In Odenwald, from where they hailed, my mother’s ancestors had an easier life. There, the sun and air are full of gentleness and the soil is generous to those who lovingly take care of it. This little town, in which I lived and wrote this book, is dominated by the ruins of a fortified castle. Near its great gate, which still stands, is an ancient lime tree. In its shadow, Boniface is said to have preached Roman Christianity to the Chattes. If, whilst sitting under the lime, I looked to the North, my gaze would dwell fascinated upon a basalt cone rising up sharply towards the sky. At its summit, the German ‘Apostle’ had his monastic fortress, the Amöneburg. Boniface, this saint who pretended to preach the gospel of love, never cared much for my ancestors. In a letter addressed to the Pope in 742, he referred to them as “idiots”. A few hours walk separate my little village of High Hesse from Marbourg on the Lahn. A son of this town, nicknamed the “scourge of Germany”, also preached for Rome. This person, the Grand Inquisitor Konrad von Marburg, covered his native country on the back of a mule, multiplying the “rose miracles” for the canonisation of his illustrious penitent, Elizabeth of Thuringe, — all the while, taking advantage of this to lay his hands on some heretics. They were put to the stake in the middle of town, in the square that still today bears the name ‘Ketzerbach’. My ancestors were pagans, and my forefathers heretics. ...