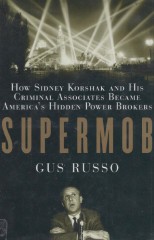 Acclaimed investigative reporter Gus Russo returns with his most extraordinary book yet, the remarkable story of the -"Supermob"- a cadre of men who, over the course of decades, secretly influenced nearly eYery aspect of American society. Supermob pre-ents stunning revelations about national icons such as Ronald Reagan, Jules Stein, Lew Wasserman, Paul Ziffren, Abe Pritzker, and others. Although most of these men were meticulously low profile, Supcrmob pulls the lid off of their half-century infiltration into American business, politics, and society. At the heart of it all was the Chicago Outfit's fair-haired boy, Sidney Korshak, a.k.a. "The Fixer," who from the 1940s until his death in 1996 was not only the most powerful lawyer in the world, according to the FBI, but also the enigmatic, almost vaporous player behind sorne of the shacliest deals of the twentieth century. \Vith the mob 's vise grip over American labor, it was Korshak whom they designated to manage their investments: from the Outfit's hitherto undisclosed California land grabs (the real "Chinatown" story) to Hollywood quid pro quos, from casino monopolies to underhanded hotel deals. As tl1e underworld's primary link to the corporate upperworld, Korshak's backroom dominance and talent for anonymity remains unparalleled. ControYersial. exhaustively researched, endlessly entertaining. and lavishly illustrated with many previously unseen photos, Supermob is a probing investigation into a little-knovn chapter of American history. ...