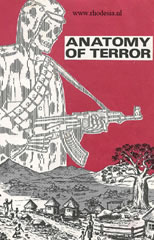 This is not a pretty book. The pictures inside depict a few of the many atrocities perpetrated by the so-called Freedom Fighters in Rhodesia. Outright torture has long been a weapon of the Communist - trained thugs who, for the past 15 years, have been trying to force their philosophies on an unwilling and peaceloving, indigenous, population. The incidents and pictures in this book record the wave of atrocities - murder, rape, abduction, torture, beatings, robberies and cattle maimings, over the last 18 months. If, as they say, the people are on their side, why is it necessary for them to resort to such barbarism in order to convince them? It is a sober thought that the people who perpetrate these crimes are financed and comforted by the international community and the World Council of Churches. Perhaps this publication will serve to prove the calibre of men who masquerade as liberators of a so-called oppressed community who are supposed to be in rebellion against a white-dominated Government. Let no one doubt the message it conveys. For this is the "new order" that the Organization of African Unity would seek to introduce to Rhodesia. This is the work of people inspired by African despots, massacres in the former Belgian Congo, wholesale murder of the Lumpas in Zambia, the bloody toll of Burundi, the butchers of Biafra and the assassins of Zanzibar - the whole blood-stained fabric of African aspirations. This then is the anatomy of terror. ...