Bjerknes Christopher Jon - The manufacture and sale of Saint Einstein 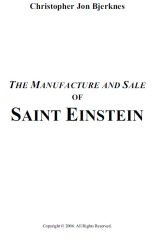 Introduction. Racist physicist Albert Einstein became internationally famous in 1919 when newspapers around the world reported that he had correctly predicted that the gravitational field of the sun would deflect rays of light. The press promoted the virulently racist and segregationist Zionist, Albert Einstein, as if he were the world’s greatest mind, a mind that had surpassed the genius of Copernicus, Galileo and Newton. In April of 1921, Albert Einstein took advantage of his newly found fame and traveled to America. He promoted racist Zionism to the Jews of America, while raising money for the Eastern European Zionists who had made him famous. Einstein championed the racist doctrine of Theodor Herzl, that Jews were a distinct race of human beings, who could not assimilate into any Gentile society and therefore ought to segregate themselves and form a nation in Palestine. Einstein also believed that there ought to be a world government. However, Einstein thought that Israel ought to be a distinct nation. Though he described himself as non-religious, Einstein’s racist views, and his concurrent call for a world government and a segregated “Jewish State” mirrored Jewish Messianic prophecies. Einstein raised money in America for the Hebrew University in Jerusalem. He also tried to popularize the racist Zionist cause. The news media enthusiastically covered his trip to the United States. Mainstream news media claimed that all of Einstein’s critics were anti-Semites, but did not criticize Einstein for his rabid racism or his segregationist politics. Prof. Arvid Reuterdahl of St. Thomas College, in St. Paul, Minnesota, responded to Einstein’s aggressive self-promotion. With reference to the notorious circus promoter P. T. Barnum, Prof. Reuterdahl dubbed Albert Einstein the “Barnum of the Scientific World”. He publicly challenged Einstein to a debate over the merits of the theory of relativity and publicly accused Einstein of plagiarism. Einstein refused to debate Reuterdahl. Einstein stated that his sole purpose for coming to America was to raise money for the Hebrew University in Jerusalem and that he could not be bothered with issues related to “his” theories. Even before coming to America, Einstein had earned an international reputation for hiding from his critics. His favorite tactic to avoid debate was to accuse his critics of being “anti- Semites”, while refusing to address their legitimate accusations of his, Einstein’s, irrationality and plagiarism. Like most bullies by bluff, Einstein was a coward, who hid behind the power of the racist Jews who attempted to shield him from criticism through well-orchestrated smear campaigns in the international press. In spite of this, or perhaps because of this, Einstein generally had a hard time in America. Due to his incompetence, and the tribalistic racism he and his Jewish friends exhibited, Einstein faced scandal after scandal. Though Einstein had arrived to a triumphant welcome in New York City, he left the United States an utter disgrace. Though Einstein had accepted many honors from American universities, he publicly ridiculed American scholars and Americans in general in a widely published interview he gave after he had returned to Europe. The grapes had turned to sour gripes. ...