Brzezinski Zbigniew - Russia and the commonwealth of independent states 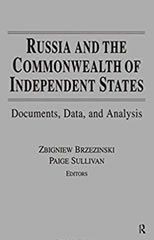 Introduction: Last Gasp or Renewal ? Zbigniew Brzezinski. Will the Russian empire be the first in history to have experienced both dissolution and restoration? This is the key question posed by the formation and the inner dynamics of the Commonwealth of Independent States (CIS), the successor to the Soviet Union. The answer will have vital significance for the geopolitical shape of the world. The Soviet Union was the successor to the tsarist Russian empire. In both, the inner and dominant core of imperial might was the Russian state, with the Kremlin as its seat of power. With the dissolution of the Soviet Union, the question consequently arises: What in fact is Russia? Most importantly, how does Russia define itself: as a multinational empire or as a national state? That issue perplexes modem Russians as much as it affects their immediate non-Russian neighbors. A Russia that defines itself as a national state might not always live in peace with its neighbors, but such a selfdefinition would thereby acknowledge the separate political identity of the non-Russians. ...