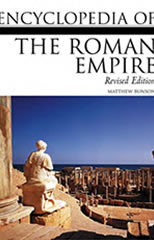 Introduction. The poet Martial once observed, Eheu fugaces anni (Alas, for the fleeting years). His words are quite meaningful when applied to the Encyclopedia of the Roman Empire. The first edition of this book was published nearly eight years ago. Surprisingly, it remains the only comprehensive A-to-Z reference to the more than 500-year period of Roman imperial civilization. This new edition seeks to build on the original encyclopedia and is marked by considerable revision, improvement, and updating. The extent of the changes will become evident to anyone familiar with the older edition, but the essential task of this work remains unchanged. The encyclopedia covers the most important personalities, terms, and sites that played a part in Roman evolution from the period of Julius Caesar and the Gallic Wars (59–51 B.C.E.) to the fall of the empire in the West (476 C.E.). As was noted in the last edition, the subject of Roman history, even a seemingly limited aspect such as the imperial epoch, is a complex one. It involves a host of subjects, figures, ideas, and interrelated themes. Even the answering of simple questions proves extremely difficult, due to the amount and variety of information scattered in hundreds of volumes. This reference work thus seeks to provide easy-to-use and readable entries that might be able to shed a little light on a great many topics of interest to readers all over the world. Among the many changes that are introduced in this edition are new maps and illustrations, the inclusion of suggested reading lists for a large number of individual entries, and an expanded reading list at the end of the book. The volumes selected for these lists are intended for the general reader and are deliberately editions that appeared in the English language. Nevertheless, the volumes chosen represent some of the most up-to-date works available for the specific topics, and all of them are recommended to anyone interested in expanding studies on specific aspects of Roman civilization. ...