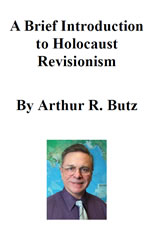 I see three principal reasons for the widespread but erroneous belief in the legend of millions of Jews killed by the Germans during World War II: U.S. and British troops found horrible piles of corpses in the West German camps they captured in 1945 (e.g. Dachau and Belsen); there are no longer large communities of Jews in Poland; and historians generally support the legend. During both world wars, Germany was forced to fight typhus, carried by lice in the constant traffic with the East. That is why all accounts of entry into the German concentration camps speak of shaving of hair and showering and other delousing procedures, such as treatment of quarters with the pesticide Zyklon. That was also the main reason for a high death rate in the camps, and for the crematoria that existed in all. When Germany collapsed in chaos, then of course all such defenses ceased, and typhus and other diseases became rampant in the camps, which quartered mainly political prisoners, ordinary criminals, homosexuals, conscientious objectors and Jews conscripted for labor. Hence the horrible scenes, which however had nothing to do with “extermination” or any deliberate policy. Moreover, the West German camps involved were not the alleged “extermination camps,” which were all in Poland (e.g. Auschwitz and Treblinka) and which were all evacuated or shut down before capture by the Soviets, who found no such scenes. The “Final Solution” spoken of in the German documents was a program of evacuation, resettlement and deportation of Jews with the ultimate objective of expulsion from Europe. During the war Jews of various nationalities were being moved east, as one stage in this Final Solution. The legend claims that the motion was mainly for extermination purposes. The great majority of the millions allegedly exterminated were East European — not German or West European — Jews. For that reason study of the problem via population statistics has been difficult to impossible, but it is a fact that there are no longer large communities of Jews in Poland. However, the Germans were only one of several parties involved in moving Jews around. The Soviets deported virtually all of the Jews of eastern Poland to their interior in 1940. After the war, with Polish and other Jews pouring out of the East into occupied West Germany, the Zionists moved large numbers to Palestine, and the United States and other countries absorbed many Jews, in most cases under conditions making impossible a numerical accounting. Moreover, the Polish borders were changed drastically at the end of the war; the country was literally moved west. Historians generally support the legend, but there are precedents for nearly incomprehensible blindness on the part of scholars. For example, throughout the Middle Ages even the Pope’s political enemies conceded his false claim that the 4th century Emperor Constantine had ceded rule of the west to the Pope, although all knew very well that Constantine had been succeeded by more emperors. Near unanimity among the academics is especially suspect when there exist great political pressures; in some countries, Holocaust Revisionists have been prosecuted. ...