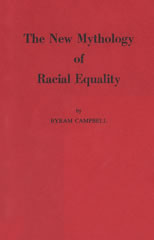 Before we start seeing the world we should gain some knowledge of the ideas that are throwing it into a ferment; otherwise, its lands emerge in half lights. For better orientation let us look backward to the early part of our century. Lothrop Stoddard in the preface to his book The Rising Tide of Color (1920) came to the conclusion that since other values depend on the quality of life Americans would wisely act to protect this value. Neither Stoddard nor the many who agreed with him foresaw the psychotic forces that would arise dedicated to destroying the moral man's values as well as our racial heritage. Because of the acceptance of the new beliefs the changes that have occurred are opposite to those forecast by Stoddard. The ideas which we have mentioned have become incorporated in a mystique. This we name The New Mythology. Unless we can gain a knowledge of how this mystique has arisen we shall be handicapped in combating it. Even if given the facts most men do not accept them, for they are usually adequately prepared only to understand other normal men . Fortunately we can call on a great philosopher for help. William James in Pragmatism (1907) called attention to a group to which he gave the name, monists or as we shall define this term, those dominated by an irrational faith in ideas based on oneness. He brought out the fact that they are subjective thinkers, ruled by their temperaments. In addition to their mania for oneness they have other characteristics, one of which is of extreme importance in understanding them. For this quality James coined the term tender-minded. ...