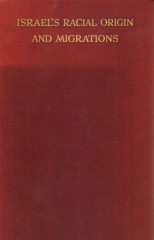 BRIGADIER-GENERAL W. H. FASKEN, c.B., is to be congratulated on the book here presented to the reading public. The theme is one of great and increasing interest to a very large circle of readers because the subject of the theme-Israel-has played and still plays such a vital part in world affairs. In his Preface, General Jlasken shews that his aim is to co-ordinate the study of Ethnology, History and the Bible. The scientist approaches the study of ethnology with a scientific aim in view; he keeps his mind clear from preconceptions in order to be able to accept facts at their intrinsic value and their implications, no matter what they are. The general reader, however, is first interested in the subject-Israel-and then seeks to find its place in the science of ethnology. It is to help this class of student that General Fasken has written. First, he has undertaken to shew the place of Israel in the ethnological groupings of the human family at various stages of world history. Next, he has undertaken to shew the relationship of Israel to Bible prophecy at every stage of world history. Further, h€ has undertaken to shew that the ethnological group-Israel-has worked out rn history the fulfilment of its predicted course as foretold in prophecy. ...