Ferrara Christopher A. - The great façade 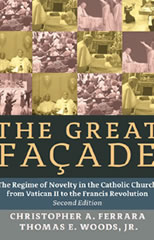 Author : Ferrara Christopher A.
Title : The great façade Vatican II and the regime of novelty in the Roman Catholic Church
Year : 2015

Foreword to the Second Edition by John Rao. Prophesy, Righteous Anger, and the Unending Neo-Catholic Conundrum. Although the word prophet is popularly understood primarily in conjunction with an inspired prediction of future events, its most common meaning in Sacred History concerns public witness to the Truth - whatever the personal consequences (often very unpleasant) for the men and women bearing the heavy burden of that testimony may be. Biblical prophets, whether warning of dire days to come or hammering at contemporary failure to follow God’s commands, are also known to us as figures filled with righteous anger. Professional modern iconoclasts are wont to attribute such zeal more to bigotry than to laudable spiritual fervor. Yet a reading of the prophets suggests another, more accurate explanation for their explosions of ire - exasperation: exasperation with the selfdestructive behavior that they saw flourishing around them; exasperation with the giddy acceptance of this folly, as though it could and should go on forever. I am certain that the authors of The Great Façade, first published in 2002, do not consider themselves inspired seers. Nevertheless, there is no doubt in my mind that their work has indeed been prophetic in the broader scriptural sense of the term. They saw that Catholicism was under obvious assault, that the consequences of its rout would be dreadful, and that their failure to take up arms against a sea of enemies would be a punishable dereliction of duty. Like the prophets of old, they were filled with a righteous anger. This was directed not only at the main source of the problem in the openly modernist enemy camp, but also against a novel and exasperating “conservative” apologetic. This latter contingent bristles at the mere suggestion of heretical influence in the new ecclesiastical order, while justifying, step by step, one and then another of its clear manifestations. Because such a peculiar “alliance” of outright modernists and fellowtraveling believers has remained strong down to the present day, the collapse of the Catholic Church has also continued almost unabated. No special divine inspiration was required to predict that unhappy development. The authors’ Faith and Reason alone demonstrated that the one would flow inexorably from the other. Those new to the crisis in the Church as well as old soldiers seeking to recharge intellectual batteries run low in this wearisome Fifty Years War can make use of The Great Façade’s succinct outline of the modernist positions in matters of faith and morality that so swiftly rode to dominance on the back of the Second Vatican Council. The success of these innovations, as the authors clearly indicate, did not come through any direct teaching of error on the part of the Holy Synod. Their triumph was due to the victorious progressive faction’s appeal to the much more subtle and purely human modus operandi that proponents of an “enlightened Catholicism” had been encouraging since the eighteenth century. This called for a “gentle and pastoral” as opposed to a “harsh and doctrinal” approach to treatment of the problems of evangelization in a world turned upside down by heresy and secularization. ...