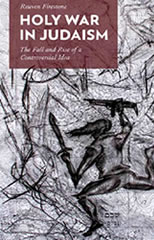 When I showed a Muslim academic colleague of mine a copy of my book on holy war in Islam shortly after it had just been released, he chastised me for assuming that Islam had a concept of holy war. “How could you write this?” he said. “You know that there is no holy war in Islam!” His underlying concern, it seemed to me, was that my book would encourage a negative view of Islam in the public eye. Similarly, as I completed the manuscript for this book and showed parts of it to Jewish colleagues, I sometimes received a parallel response. Some were surprised, and some displeased. “You know that there is no holy war in Judaism,” I heard. After continued discussion it appeared to me that they were particularly concerned about this book eliciting resentment against Jews, Judaism, and the state of Israel. Yet both my Muslim and Jewish colleagues are technically correct in their denial of the phenomenon of holy war in Islam and Judaism. In fact there exists no traditional term for holy war in the vocabulary of either religion. “Holy war” is a slippery term, and some have cautioned against using it in scholarship because of its current politicization and because the traditional context for its discussion is within Christian thought and practice. Moreover, holy war in the Western imagination is war for conversion, while neither Judaism nor Islam condones engagement in war for that purpose. But fear of criticism or political backlash should not hinder scholarship, and the lack of a Hebrew term corresponding exactly to holy war or absence of conversionary wars in Judaism does not prove the nonexistence of the phenomenon as defined here. Judaism, Christianity, and Islam has each developed its own notion of divinely sanctioned war among several options or tactics available to protect the religious community, preserve the integrity of its religious tradition, or further its institutional goals. What I mean by holy war is organized mass violence directed against rival communities based on what is considered to be God’s approval or authority. This is the most fundamental definition of holy war: war that is justified by divine authority. Although the authority for holy war ultimately derives from the divinity, that authority is communicated through a variety of media among the world’s religions: scripture, dreams, visions, or audible messages conveyed through prophets, divination by religious leaders, natural signs and omens, or the interpretations of any of these by priests, sages, elders, shamans, or other religious experts. What makes holy war “holy” is its divine authority, and there is no major religion known to me that does not provide some kind of divine authority for mass violence. Having said that, among the religious systems I have studied, Judaism has the least developed and least politicized ideology of holy war, and when it is invoked it has always applied to an extremely limited geographic scope. This observation does not suggest to me that Judaism is intrinsically better able to resolve conflict peaceably or is more ethical than its sister religions, because I believe that the limits that Judaism has imposed on itself are fully explicable for historical reasons. In fact, the overwhelming influence of history on the religious formulation and application of holy war is one of the lessons I draw from this study. For the purposes of this study, I consider religion to be an institution constructed by humans in response to human comprehensions of the transcendent or divine. ...