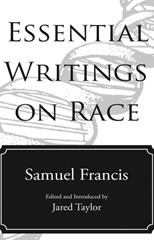 Introduction by Jared Taylor. Samuel Todd Francis wrote brilliantly on a wide range of subjects- terrorism, politics, society, history, the South, literature, theory of elites-but he will be best known to future generations for what he wrote about the politics of race. He was his generation’s most incisive theorist on this difficult subject, and he paid a high price for his determination to write the truth as he saw it. Francis was born on April 29, 1947, and was reared in Chattanooga, Tennessee. He showed great ability as a student, winning citywide prizes for poetry and essays. He went to John Hopkins as an undergraduate and earned a Ph.D. in British history from the University of North Carolina. From 1977 to 1981, he was a specialist on terrorism and security at the Heritage Foundation in Washington, D.C., before joining the staff of Sen. John East, Republican of North Carolina. When Senator East died in 1986, Francis found his true calling as a journalist and essayist, when he joined the Washington Times as an editorial writer. In both 1989 and 1990, he won the Distinguished Writing Award for Editorial Writing given by the American Society of Newspaper Editors, and in both years, he was a finalist for the Scripps Howard Foundation’s Walker Stone Prize for editorial writing. He became a staff columnist for the Washington Times , and Creators Syndicate distributed his twice-weekly columns for national syndication. ...