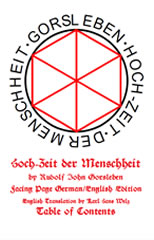 An Introduction to Hoch-Zeit der Menschheit by Karl Hans Welz. This work, Hochzeit der Menschheit (Peak-Time of Humanity), was considered to be dangerous material by the governments of a few European countries. Apparently they considered it to be so dangerous that, according to their opinion and vote in parliament, their subjects should be forbidden to read it. We all know very well that censorship is a blatant violation of human rights, and so do the people who dominate those countries and apparently are afraid of the very freedom that they preach! Freedom of opinion and freedom of expression are precious rights that all of us should enjoy. Freedom of opinion means to allow other persons their opinion and freedom of expression, even if we do not like it, even if it insults our deepest feelings. People who know me are fully aware that I never would endorse many parts of the contents of this book. In fact, I cannot subscribe to the racisttheosophical garbage therein nor to the references to Plato’s invention, “Atlantis,” the search for which appears to be like people spending millions in finding Moore’s Utopia. On the other hand, I feel that a large portion of it contains valuable information! I will do my best to defend the right of freedom of opinion and freedom of expression of others, even if I may feel insulted by them using their innate rights. In my view, this is a true democratic attitude. Therefore, I consider it important that every person who wants this information should get it, unfettered and without need to fear being burned at the stake for reading something that belongs to the “index librorum prohibiturum”, as the index of banned books was called by the Church in the “good olden times”. Back then the way of dealing with people who thought politically incorrect was burning them! Governments who practice and support censorship of any kind and jail people for expressing their opinion are not a bit better than the dictatorships that they claim to have outgrown. In future history, they will take a rightful place among the tyrants of our planet. If they do not get their deserved punishment during their present life times, may they rot or burn forever in whatever hells their sick minds can imagine ! ...