Grant Madison - The conquest of a continent 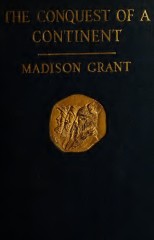 Author : Grant Madison
Title : The conquest of a continent or the expansion of races in America
Year : 1933

Introduction. The character of a country depends upon the racial character of the men and women who dominate it. I welcome this volume as the first attempt to give an authentic racial history of our country, based on the scientific interpretation of race as distinguished from language and from geographic distribution. The most striking induction arising through research into the prehistory of man is that racial characters and predispositions, governing racial reactions to certain old and new conditions of life, extend far back of the most' ancient civilizations. For example, the characteristics which Homer, in the Iliad and the Odyssey, attributed to his heroes and to his imaginary gods and goddesses were not the product of the civilization which existed in his time in Greece; they were the product of creative evolution long prior even to the beginnings of Greek culture and government. This creative principle—the most mysterious of the recently discovered phenomena of evolution, to which I have devoted the researches of nearly half a century—is that racial preparation for various expressions of civilization— art, law, government, etc.—is long antecedent to these institutions, Ripley missed this point in his superb researches into the racial constitution of the peoples of Europe. Grant partly based his Passing of the Great Race on Ripley's researches, but did not carry out the purely anatomical analysis to its logical end-point, namely, that moral, intellectual, and spiritual traits are just as distinctive and characteristic of different races as are head-form, hair and eye color, physical stature, and other data of anthropologists. In the present volume, which I regard as an entirely original and essential contribution to the history of the United States of America, Grant goes much further and in tracing back the racial origins of the majority of our people he lays the foundation for an understanding of the peculiar characteristics of American civilization, which, all agree, is of a very new type, something the world has never before seen. Grant supports Ripley in his distinction between three great European stocks—Nordic, Alpine, Mediterranean. He gives very strong additional reasons for one of his own earlier inductions, namely, that the Aryan language was invented by primitive peoples of the Nordic race before its dispersal, in the third millennium B.C., from the Steppe country in the southeast of Russia. This superb and flexible language doubtless aided the Nordic race in its conquest of Europe, in its ever-westward journey across the Atlantic, in its Anglo-Saxon occupation of our continent, in its stamping of Anglo-Saxon institutions on American government and civilization. We all recognize that, like all other languages, Aryan is purely a linguistic and not a racial term, just as French is spoken equally by the Norman Nordics of the north of France, by the Alpines of the center, and by the Mediterraneans of the south. My faith is unshaken in the ultimately beneficial recognition of racial values and in the stimulating and generous emulation aroused by racial consciousness. Let this stimulation be without prejudice to other racial values—which should be duly recognized and evaluated—values we Anglo-Saxons do not naturally possess. Moreover, I set great store by the great mass of documentary evidence assembled by Grant in the present volume. I think it explodes the bubble, of the opponents of racial values, that they are merely myths. The theme of the present work is that America was made by Protestants of Nordic origin and that their ideas about what makes true greatness should be perpetuated. That this is a precious heritage which we should not impair or dilute by permitting the entrance and dominance of alien values and peoples of alien minds and hearts. Finally I would like to define clearly my own position on these very important racial questions which arouse so much heat, so much bad feeling, so much misrepresentation. I object strongly to the assumption that one race is "superior" or "inferior" to another, just as I object to the assumption that all races are alike or even equal. Such assumptions are wholly unwarranted by facts. Equality or inequality, superiority and inferiority, are all relative terms. For example, around the Equator the black races and certain of the colored and tinted races are "superior" to the white races and may be capable under certain conditions of creating great civilizations. In a torrid climate and under a burning sun witness the marvellous achievements of the Mediterranean race in Mesopotamia, Egypt, North Africa, Cambodia, and India between 4000 B.C. and 1250 a.d. Or, coming nearer home to the cool mountain regions, witness the great achievements of the Alpine race in engineering, in mathematics, and in astronomy. It follows that racial superiority and inferiority are partly matters of the intellectual and spiritual evolution which guides one race after another into periods of great ascent too often followed by sad and catastrophic decline. In this as in all other interminglings of science and sentiment, let us not extenuate nor write in malice, but always in broad-mindedness and a truly generous spirit. It is with the greatest pleasure that I have written a few words endorsing this book as the first racial history of America, or, in fact, of any nation. I stand with the author not only in nailing his colors to the mast but in giving an entirely indisputable historic, patriotic, and governmental basis to the fact that in its origin and evolution our country is fundamentally Nordic. Henry Fairfield Osborn. August, 1933. ...