« Gross Walther - Race - Lindbergh Charles Augustus - Why is your country » 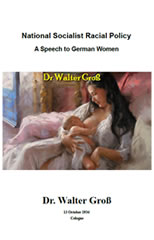 My Dear German Women and Girls ! When Germans come together today to discuss the things that concern us both as individuals and as a nation, it is a solemn occasion, whether we wish it to be or not. During the political struggles of the past, we could speak of party programs or of civilization without any involvement of our soul. Now we have forgotten how to approach an issue merely with our understanding, merely with our mouth, merely with our heart. We have become whole people once again. When we speak with others, we do so with our full being. That is what made the movement strong, and great, and powerful from its first days. It is also that which the enemy, on this side of the border and the other, cannot understand, and which it hates with deadly strength. As this great and beautiful people’s movement began, so also began a hard and bitter struggle between enemy and German forces, between an old world that is really long dead and buried, and the new world that is struggling to reach the light through us. This struggle has been going on in people’s hearts and souls for years, and is nowhere near its end. The world finds it difficult to understand that which is at the center of our endeavors: the value of blood and race. Our enemies first laughed in pity, then in hatred as we spoke of it. Let us speak of what we National Socialists mean by that so that it will become clear why the German woman may be even more concerned about these matters than the man, his state, and his fighting organization can be. There was a time in the past when we were untrue, untrue in the deepest sense. ...

« Gross Walther - Race - Lindbergh Charles Augustus - Why is your country »