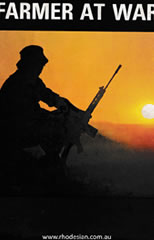 Foreword. This is a salute to our farmers - white and black farmers and their families who have been in the frontline of the terror war for more than a decade. This is their story told by them. It is a story of heroism and tragedy, of dedicated determination and tenacity in the face of an unprecedented onslaught on the land. Many have died and many more have been maimed. Their moral and physical courage is being sorely tried and tested over and again. Lord Moran, who was Sir Winston Churchill's physician for more than a quarter of a century, once wrote: "Courage is willpower ... A man's courage is his capital and he is always spending ..." There is no doubting the willpower of the farming community. Courage has different faces. There is the courage to stand up and shoot back to drive the raiders from the homestead and land; there is, too, the courage to plough, plant and reap another crop, putting all at risk season after season. The Farmer at War is also a tribute to those in commerce and industry who provide vital services to agriculture; a tribute to agronomists, extension and veterinary officers in both the public and private sectors; a tribute to the Police and Security Forces. Their combined contribution is incalculable. Foremost, however, this salute is to the women behind the men - the farming wives. In them lies the strength of our nation. Denis Norman, President, Rhodesia National Farmers' Union (now the Commercial Farmers' Union). ...