Hergé - Tintin in the land of the soviets 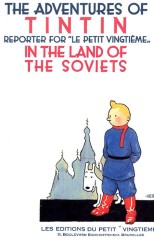 Author : Hergé (Remi Georges Prosper)
Title : The adventures of Tintin reporter for "Le Petit vingtième" in the land of the soviets
Year : 1930

Foreword. This first adventure of Tintin, the boy reporter. appeared in 1929 in a children ·s supplement to a Belgian daily newspaper. Le Vingtieme Siecle. Herge. Georges Remi. then twenty-two years old, was employed on the staff as an artist. He had received no formal art training, but was already showing the originality and wit that would make him a unique figure in the world of the strip cartoon. Herge's satire on the Soviet state was very much of its time. He himself had not been to Russia, but had read a book published the year before, Moscou sans voiles: Neuf ans de travail au pays des Soviets by Joseph Douillet, a former Belgian consul in Rostov-on-Don. Soviet propaganda to persuade the world outside Russia that the economy was booming was a particular target for Herge, as were the activities of the secret police. the OGPU. Incidentally, he errs on one occasion 1n the story when he calls them the Cheka, their name before 1922. Publication in Le Petit Vingtiem_e began on 10 January 1929. In 1930 the adventure was issued in album form, now a very rare book greatly sought after, the 500 copies being numbered and signed "Tintin et Milou". There were, it is believed, nine subsequent editions, differing only in the layout of the print on the title page. With the exception of a reissue in 1969 for the personal use of the author, again limited to 500 copies, and some pirated editions, more than forty years elapsed before this adventure was again published, in the first volume of the Archives Herge. This volume (in which the original versions of Tintin au Congo and Tintin en Amerique also appear) includes a page which originally appeared in Le Petit Vingtieme No. 60, omitted for no apparent reason from the first edition in album form. lt is reproduced here as page 97A. L. L -C. M. T. ...