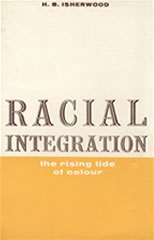 All who are genuinely concerned about the destiny of our nation and people should ponder on what is set out in this book. It is an analysis of what is popularly called The Colour Problem. It is not a comprehensive study of the question but seeks to direct attention to the reality that lies beneath the surface of social tensions which are racial in origin. The author rests his case on the self-evident truth of the natural inequality of men, that men are not born equal and that because of the varying limitations of their inborn talents they can never be made equal by upbringing, education or artificial law. Amongst these basic inequalities are the genetic racial ones, both of body and mind. The author claims that racial equality is a political myth. The human races have been brought into being at different times and in different places through complex evolutionary and historical processes by the hand of God, with the result that each race is endowed with unique characteristics by which it can be identified. Colour of skin is the most conspicuous of these, but although it furnishes a natural means of identification it is not the most important of the racial features. Much more important are those associated with character and the brain. From earliest times there have been migratory movements across the world of men of fundamentally different breeds, but all such movements have been from populated areas to unoccupied or sparsely inhabited areas. With the present migration into Britain, where the coloured population already exceeds a million and is rapidly increasing, it cannot be argued that immigration can be balanced by emigration on a numerical basis, since the exchange involves quality as well as quantity. Earlier immigrants entering England such as the Flernings and the Huguenots were of the same racial strain as the English with similar historical and Christian backgrounds and were congenially absorbed into the English community. Jewish immigrants, however, have never sought to be fully integrated, wishing instead to preserve their "racial apartness". No such considerations apply to the dark immigrants now trying to settle in the land. It may be assumed that the black immigrants will never become an integral part of English society. In any case why should a Sikh, for example, be expected to drop his customs to conform to English Christian standards or a Moslem or a Hindu be required to renounce his traditional faith in order to facilitate his absorption into the community ? These are the superficial aspects of racial integration representing the social side of the problem. Nevertheless they will tend to bring about a natural segregation of people according to their own kind. If racial minorities can claim the right to enjoy their own company so then can the English majority and their right is a prescriptive one under natural law and therefore paramount. Any attempt by legislation to deprive the English of their inalienable right to discriminate in favour of their own people will surely engender a form of racial hatred that will be difficult to subdue. Further, the author points out that race-consciousness is not apparent in very young children and only comes into play in adult life as a dynamic urge for survival when races are thrown together in a haphazard way as they have been in England. No Englishman should be criticised if he is repelled by the idea of his daughter consorting with a Negro or a member of any other coloured race. His attitude is a natural one, for it is this sensitive appreciation of pedigree qualities that will insure a worthwhile future for his own race. Racial attitudes, the product of racial attributes, do not in themselves constitute racial prejudice. Each nation tends to reflect the racial composition of its people : its innate qualities of mind, a common ancestry and history and a shared birthright. The introduction of alien races into such a community disturbs the social balance and perceptibly weakens the nation's will to survive as an entity. This book by giving facts and figures without bias, sounds a warning note to all who would work for the survival of the English way of life. ...