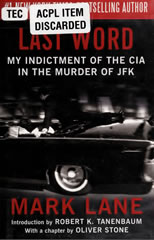 Author : Lane Mark
Title : Last word My indictment of the CIA in the murder of JFK
Year : 2011

The last word on the JFK assassination by the New York Times bestselling author and JFK historian ! Mark Lane has tried the only case in the history of America in the United States District Court in which jurors concluded that the CIA killed President Kennedy. While that evidence is clear, there were still pieces missing from the puzzle. How did the CIA control forces of the law on the ground in Dealey Plaza? How did they also control the Dallas Police Depart¬ ment, the Dallas Sheriff's Department, and the United States Secret Service? How did federal authorities prevent the House Select Commit¬ tee on Assassinations from discovering the truth about the complicity of the CIA? What was the attitude of the United States Secret Service that day in Dallas? With exclusive new interviews, sworn statements, and meticulous new research (including interviews with Oliver Stone, Dallas Police deputy sheriffs, Robert K. Tanenbaum, and Abraham Bolden), Lane finds out firsthand exactly what went on the day JFK was assassinated. ...