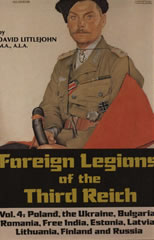 Introduction. The final volume of this series deals with Germany's eastern allies, her Russian mercenanes and the peoples of the Baltic states. Thanks to the generous help of a number of latvian and Estonian veterans, among whom special mention must be made of lndulis Kaiocins, Arnis Keksis and Henry Ruutel, it has been possible to achieve a wide and accurate coverage of the contribution of the Baltic peoples to the struggle against Communism. For Bulgaria, Rumania and Finland general summaries of their principal uniforms, ins1gnia and decorations are given. A complete coverage of these countries' armed forces and national awards was not contemplated or attempted. A large part of this volume is devoted to the so-called Ostvolker--those former Soviet citizens who elected to fight not so much for Germany as against the hated Communist tyranny of Josef Stalin. Coverage of these "eastern peoples" is as full as can be achieved. Possibly no final and definitive account of their organization, untforms and insignia could ever be compiled. This is simply because, at least in the opening stages of the Russo-German conflict, many eastern volunteers were recruited locally (and illegally) by German commanders who kitted them out with rank, and other, insignia of their own devising and even with military "decorations" of their own invention! However, what is known is here-in recorded, but the author would be very pleased to receive from veterans (or others) any further information on this, or any, of the countries covered. ...