Luther Martin - The babylonian captivity of the Church 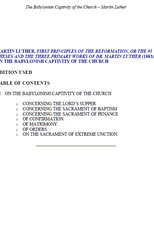 Martin Luther, of the Order of St. Augustine, salutes his friend Hermann Tulichius. Whether I will or not, I am compelled to become more learned day by day, since so many great masters vie with each other in urging me on and giving me practice. I wrote about indulgences two years ago, but now I extremely regret having published that book. At that time I was still involved in a great and superstitious respect for the tyranny of Rome, which led me to judge that indulgences were not to be totally rejected, seeing them, as I did, to be approved by so general a consent among men. And no wonder, for at that time it was I alone who was rolling this stone. Afterwards, however, with the kind aid of Sylvester and the friars, who supported indulgences so strenuously, I perceived that they were nothing but mere impostures of the flatterers of Rome, whereby to make away with the faith of God and the money of men. And I wish I could prevail upon the booksellers, and persuade all who have read them, to burn the whole of my writings on indulgences, and in place of all I have written about them to adopt this proposition: Indulgences are wicked devices of the flatterers of Rome. ...