Macleod Wayne - The importance of race in civilization 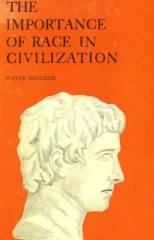 The lesson of History. For the past 6,000 years the world has been witness to a phenomenal ebb and flow in the affairs of men. From a precarious living as food gatherers when people were as much a part of nature as the trees and animals, which even today is admitted by culturally primitive tribes in their legends, from a time when one centmy was much the same as any other, mankind, or rather certain segments of mankind, at various periods and places embarked upon programs of vigorous activity and thought, producing structmes and evolving a history that will forever excite the imagination, only to eventually fall back again into the primordial night, leaving their mins as testimony of their greatness, indeed, even existence. When we reflect upon the benefits of cultural and material progress that has elevated man out of the animal realm, in the sense of giving him a measure of dominance over physical forces, and his own life one of promising ease and security, the wonder is not so much that civilization and learning should arise, but rather that it should decline, and any t:hinking on this subject undertaken to explain its appearance, giving sole credit to external influences of climate or geography, must by necessity break down on this account, since these supposed stimuli remain. To the superficially educated, ·the destruction of a great civilized Culture comes with its being overrun by barbaric hordes, with, presumably, the example of Rome in mind, or through war that brought an end to the Aztec and Carthagenian Empires, and which is especially easy to believe in the modern age of atomic weapons. This popular view, of course, contains a grain of fact, but is not the kernel of truth, as any informed historian would readily agree with Toynbee's comment, that of 21 occasions where civilization has been established, 19 Cultures perished, nQt because of external conquest but because of evaporation of substance from within. In other words, where a great Cultme has been erased from the world we should first look for evidence of decline inside its structure, for this is the enigma: the civilizations of the past, like living organisms, have shown cultural deterioration on their own part, whose institutions became spiritless, formalized, hierarchial, sometimes ruthless, shells, which less sophisticated but more vigorous peoples did us the service of putting an end to. ...