Macleod Wayne - The mistake of universalism 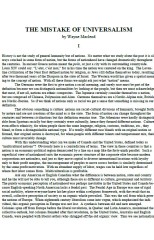 History is not the study of general humanity but of nations. No matter what we study about the past it is always couched in some form of nation, but the forms of nationhood have changed dramatically throughout the centuries. In ancient Greece nation meant the polis, or just a city with its surrounding countryside. Louis XIV could say: “L’etat, c’ést moi,” for in his time the nation was centered on the king. The Levantine civilization of the Near East defined nation by religion, as Jews still define themselves today, resulting after two thousand years of the Diaspora in the state of Israel. The Western world has given a spatial meaning to the concept of nation. With all these forms we might ask just what “nation” means. The Germans were the first to give nation a racial meaning, and surely race must be part of the definition because we can distinguish nationalities by looking at the people, but then we must acknowledge that most, if not all, nations are ethnic composites. The Japanese certainly consider themselves a nation, but are composed of Chinese, Polynesian and Ainu. Germans themselves are a Nordic-Alpine mix, British are Nordic-Iberian. So if we think of nations only as racial we get a sense that something is missing in our definition. That obvious something is culture: nations are racial-cultural divisions of humanity, brought forth by nature and are not creations of the mind as is the state. The form of nation can change throughout the centuries and between civilizations but this definition remains true. The Athenians were hardly distinguishable from Spartans racially but they certainly were culturally, hence they formed different nations. Culture even affects ethnicity, for when people share the same language, religion, customs, traditions, etc., they blend, to form a distinguishable national type. If a totally different race blends with an original nation so formed, that original nation is destroyed, for when people with different talents and temperament mix, their culture must invariably change. With this understanding what can we make of Canada and the United States, defined today as “multicultural nations”? Obviously here is a contradiction of terms. The view in these countries is that a nation is an economic-political region demarcated by a line on a map like the forty-ninth parallel. Such a superficial view of nationhood suits the economic power structure of the corporate elite because modern corporations are nationless, and just as they move capital to diverse international locations with loyalty only to their profit margins, the encouragement of peoples to move across borders is similarly determined by the same profit motivation. With an abundant supply of labor, wages can be held low regardless of where that labor comes from. Multiculturalism is profitable. Ask any American or English Canadian what the difference is between nation, state and country and he/she will not be able to tell you, although these are as different as culture, government and territory. The purely economic perception of nationhood was perhaps inevitable in the United States and Canada because English-speaking North American lacks a feudal past. The Feudal Age in Europe was one of rigid social mobility, where everyone knew his/her place within a religious framework, with the result that an overall, collective perception of society as an organic whole prevailed. This was the soil from which grew the nations of Europe. When eighteenth century liberalism came into vogue, which emphasized the individual, this organic perception in Europe was not lost. A synthesis between old and new emerged. Colonies spun off from Europe before the liberal revolution, in Quebec and Latin America, maintained the collective outlook, but colonies founded after that revolution, in the United States, Australia and English Canada, were peopled with liberal settlers who shrugged off the old organic view. Thus we see nationalism in these countries identified with individual benefit, such as America being the champion of private enterprise and a repository of rights and freedoms for all people. When the American national origins policy in immigration was scrapped in 1965, President Lyndon Johnson proclaimed that policy “un-American”. In World War II the English, French, Russians, Germans and Japanese fought for England, France, Russia, Germany and Japan, but Americans fought for “freedom”. When Quebec separatists expressed their desire for a sovereign Quebec to protect their unique national culture, English Canadians could only ask: “What does Quebec want?” Without an organic perception of nationhood the liberal colonies were particularly open to multiculturalism, with its rationalized justification that cultural diversity brought by the intermingling of many peoples gives richness to a country. That cultural innovations from around the world are an asset is not disputed, but it must be recognized that a mass intermingling of peoples is not necessary for such benefit. Historically, the introduction of oriental advancements into Medieval Europe was made by Europeans themselves, whether Crusaders or travelers such as the Polos. The heavy presence of Western influence in Japan does not require thousands of white faces in that nation. On the contrary, there is evidence from history that multiculturalism is destructive of great societies. No society could have been more multicultural (or cosmopolitan, as it was then called) than that of decadent Rome. Rome was the world government of its time, and in its streets were races and peoples from every part of its empire. Reflecting upon the fate of the Roman Empire, it would be untruthful to say that multiculturalism was of any lasting benefit to that great world, and naïve to assert it as an inspiration for future human progress. Yet that is what the liberal asserts, while voicing a diminutive view of race and its importance in history. ...