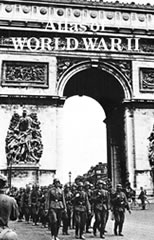 Introduction. It has often been stated that World War II was part of a European Civil War that began in 1914 at the start of World War I. This is partly true. In Europe, at least, the two world wars were the two hideous halves of the Anglo-German controversy that was at the heart of both conflicts. The question posed was: would Britain be able, or willing, to maintain her vast Empire in the face of German hegemony on the continent of Europe? The answer to that question never came. Britain, in seeking to thwart German interests on the Continent, eventually lost her whole Empire in the attempt -an empire that between the wars encompassed a quarter of the earth's surface and an equal proportion of its population. Put into that context, both world wars were dangerous for Britain to fight, jeopardizing the very existence of the Empire and inevitably weakening the mother country to the point that she could not maintain her world position at the end of the conflicts. From Germany's point of view, the wars were not only dangerous in that they finally ruined virtually every town and city, devastated the countryside and dismembered the nation; they were irrelevant. In 1890 Germany was in a position from which, within a generation, she would economically dominate the whole of Europe. Inevitably, with that economic hegemony, political hegemony would soon follow, if not even precede. By 1910 the process was well in train; had no one done anything to stop her, Germany would have achieved the Kaiser's dreams without war by the mid 1920s. The collapse of Imperial Germany in 1918, followed by temporary occupation, inflation and national humiliation, set Germany back only a few years. Despite the disasters of World War I and its aftermath, Germany was quickly recovering her old position - roughly that of 1910 - by the time Hitler took power in 1933. By 1938 German power in Europe was greater than ever before, and Britain had to face the old question once again. Could she condone German political dominance of the Continent ? ...