Oliver Revilo Pendleton - A brief history of the evil god 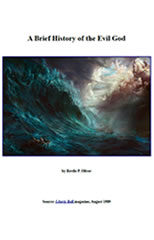 Satanism, a recognition of the existence and power of the god of pure evil imagined by Christians, is best known today because it offers a pretext for motion pictures of spectacular pornography and horror, and a pretext for the crimes of sadistically insane degenerates. It is unlikely, however, that either the Jews in Hollywood or the degenerates actually believe in the reality of Satan. In the late 1920s, young men of college age or near it who wanted to shock their elders often professed Satanism as an alternative to Communism, which they disdained because the Communists whom they knew were either vulgarians or perverts. That Satanism, was, of course, an extended jeu d’esprit, good fun at a time in which men could still be optimistic about our civilization. Apparently serious consideration of Satanism belongs to more recent decades, and accompanies the astonishing increase of general ignorance and belief in the supernatural that is one of the most ominous manifestations of our race’s abdication from the future it once had. In the dwindling minority who are aware of our approaching doom, quite a few attribute our plight to the machinations of a conspiratorial continuation of Weishaupt’s Illuminati, and this opinion is commonly accompanied by a belief that the conspirators are Satanists, who worship the god of evil and are protected and abetted by him. Although witchcraft is traditionally associated with worship of the Devil, he is conspicuously absent from the organized cults of witchcraft today, of which the most noteworthy and perhaps largest is oddly called Wicca, although that Anglo-Saxon term means ‘a wizard, warlock,’ while a witch (female) is wicce, witchcraft is wiccecraeft, and the body of persons practicing it is wiccedom. This cult, which is said to have a large number of True Believers, practices astrology and a kind of magic that is much older than Christianity and was until recently common among Anglo-Saxon and Celtic peasants, professes “a religion of joy and love,” and is perhaps best represented by The Witch’s Bible, by Gavin and Yvonne Frost (Los Angeles, Nash, 1972; paperback, New York, Berkeley, 1975). Among the plethora of other books on this kind of occultism, I shall mention only The Witch’s Workbook, by “Ann Grammary” (New York, Pocket Books, 1973), which is full of up-to-date talk about Psi-powers and other currently fashionable fads, and The Do-It-Yourself Witchcraft Guide, by “Luba Sevarg” (New York, Universal-Award, c. 1971), which you may find nearer your notion of witchcraft. One hears astonishingly little these days about Black Masses, whether celebrated for fun, in the manner of Lord Francis Dashwood, or with faith in supernatural evil, as in Huysman’s well-known Là-bas. But an organized church of Satanism was established around 1969. The issue of Christian News dated 17 April 1989 is devoted entirely to Satanism. The immediate occasion was a lecture given at Westminster College by a High Priest of the Satanist Church, which has already shown itself an authentic church in the Christian manner, since it has been split by a schism, on which it is needless to dwell here, since that would entail a long exposition of what the heresiarch did not know about Egyptian religion. That naturally leads the editor and his several contributors to discussion of the crimes that are ostensibly or presumably occasioned by Satanism, and that in turn brings the writers to an estimate of the actual power of the Christians anti-god in the world today. ...