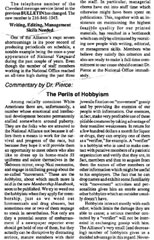 Among racially conscious White Americans there are, unfortunately, a number whose emotional and intellectual development became permanently stalled somewhere around puberty. They are the folks who are attracted to the National Alliance not because it offers them a means to work for the survival and progress of the race, but because they hope it will provide them an opportunity to meet others who also like to dress up in home-made SS uniforms and salute themselves in the bedroom mirror, swap Nazi mementos, and engage in titillating gossip about the so-called "movement." These are the hobbyists, about which rouch more is said in the new Membership Handbook, soon to be published. We try to weed out the hobbyists when they apply formembership, just as we weed out homosexuals and drug abusers, but sometimes one or two of them manage to sneak in nevertheless. Not only are they a potential source of embarrassment if a newspaper reporter ever should get hold of one of them, but they actually can be disruptive by distracting serious, mature members with their juvenile fixation on "movement" gossip and by providing the enemies of our people with information. Our enernies, infact, make very profitable use of these pitiable creatures by taking advantage of their manifest weaknesses. In retum for a few hundred dollars a month for liquor or drugs, they can employ one of them as a "verifier," for example. A "verifier" is a hobbyist who is used to make contact with putative members of a patriotic organization and verify that they are, in fact, members and then to acquire from them the names of other members or other information which might be useful to his employers. The fact that he can dropnames and exhibit some familiarity with "movement" activities and personalities gives him an entrée among other hobbyists which an outsider usually doesn't have. ...