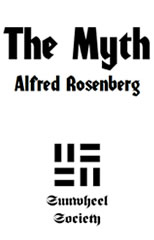 Preface. On October 1, 1946, Alfred Rosenberg was convicted and sentenced to death at Nuremberg, one of just twelve to receive this sentence. Rosenberg had never occupied a military post, directed a military operation, nor ordered any one killed. The International Military Tribunal found him guilty of all charges for which he was accused: 1. War crimes. 2. Conspiracy to wage war. 3. Crimes against peace. 4. Crimes against humanity. The president of the Tribunal had just a few years earlier presided over Stalin's show trials during the Great Purges in which approximately one million civilians were arrested and executed for "counter-revolutionary" behavior. Before the Tribunal began, he stated, "The fact that the Nazi leaders are criminals has already been established. The whole idea is to secure quick and just punishment for the crime. If the judge is supposed to be impartial, it would only lead to unnecessary delays." Among the prosecution's claims were that 20,000 Jews were vaporized with "atomic energy" at Auschwitz; 840,000 Soviet POWs were killed at Sachsenhausen in one month using a pedal-driven brain-crushing machine; and that the camp dead were made into lampshades, soap, handbags, gloves, slippers, etc - all of which are now recognized as false by mainstream historians. The normal rules of evidence were suspended and the chief prosecutor stated, "This Tribunal is a continuation of the war effort of the Allied nations. It is not bound by the procedural and substantive refinements of our respective judicial or constitutional systems." The International Military Tribunal would find numerous German and Japanese leaders guilty of war crimes and order their execution. Senator Robert Taft called the executions "a blot on the American record which we will long regret" and Supreme Court Chief Justice Harlan Fiske Stone described the Tribunal as a "high-grade lynching party." ...