Sinnett Alfred Percy - Incidents in the life of Madame Blavatsky 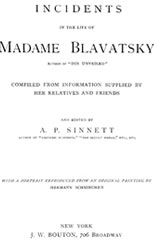 Author : Sinnett Alfred Percy
Title : Incidents in the life of Madame Blavatsky Compiled from information supplied by her relatives and friends
Year : 1886

Preface. that abnormal occurrences awaiting interpretation really did take place. The drops of the shower were unevenly distributed. They did not fall, like the rain from Heaven, on th6 just and the unjust alike, but, nevertheless,, they fell in such numbers that any sane person collecting the evidence of those who felt them, should soon have been sure that, at all events, they certainly did fall here and there. But incredulity was fashionable, however silly. It was the profession of faith of time-servers and materialists, and of all for whom religion is, above everything else, a matter of respectability. The shower grew more plentiful, but opinions that had no foundations in reason were naturally inaccessible to facts. The party of psychic discovery gained daily in strength, but the public at large remained the dupes of narrowminded and conceited leaders who could not afford to admit themselves mistaken. ...