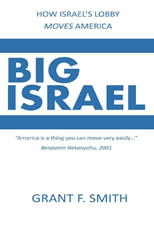 The Israel lobby. Asking whether the Israel lobby exercises undue influence has only recently stopped being entirely taboo. If defined as “influence by which a person is induced to act otherwise than by their own free will or without adequate attention to the consequences,” then the power wielded by the lobby clearly is undue. In modern-day America there is, however, nothing particularly unique about undue influence since a number of well-funded and highly organized interest groups, representing only a tiny minority, also exercise “undue influence,” sometimes in concert with the Israel lobby. These certainly include financial services, the energy industry, and weapons-making elites. However - and unlike most lobbying for Israel - those groups openly exercise undue influence, lobby overtly and are the subject of robust news reporting and public debate. Due to the long and wellremembered history of conflict as Jewish minorities within larger populations, those running the most influential Israel Affinity Organizations - a term that will be defined in detail - that are predominantly Jewish often unfairly characterize attempts to analyze or quantify their influence as driven by anti-Semitism. As a barrier to scrutiny, this charge has effectively prevented a great deal of critical analysis. In particular, it prevents many individuals who are neither Jewish, nor minor insider critics of tactical Israel lobbying issues, nor working to advance more “acceptable” IAO initiatives, from speaking up. ...