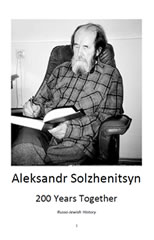 Chapter 1 : Before the 19th century. From the Beginnings in Khazaria (G13) In this book the presence of the Jews in Russia prior to 1772 will not be discussed in detail. However, for a few pages we want to remember the older epochs. One could begin, that the paths of Russians and Jews first crossed in the wars between the Kiev Rus and the Khazars– but that isn’t completely right, since only the upper class of the Khazars were of Hebraic descent, the tribe itself being a branch of the Turks that had accepted the Jewish faith. If one follows the presentation of J. D. Bruzkus, respected Jewish author of the mid 20th century, a certain part of the Jews from Persia moved across the Derbent Pass to the lower Volga where Atil (west coast of Caspian on Volga delta), the capital city of the Khazarian Khanate rose up starting 724 AD. The tribal princes of the Turkish Khazars, at the time still idol-worshippers, did not want to accept either the Muslim faith – lest they should be subordinated to the caliph of Baghdad – nor to Christianity – lest they come under vassalage to the Byzantine emperor; and so the clan went over to the Jewish faith in 732. ...