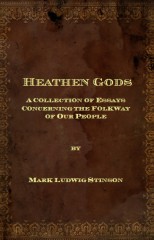 The essays in this collection were written in the years 2007, 2008, and 2009. In their original form, they were written as blog notes, message board posts, and as answers to e-mail questions I received. They were never meant to serve as a unified message about Heathenry, and there has been no attempt here to tie them together into a well-ordered or all-encompassing vision for the future of Heathenry. The essays collected here have a conversational tone, like discussion you might have around a campfire...or over a cold pint of Guinness. In collecting them, I have attempted to put them in an order that makes sense. To further this effort, I have also grouped them into categories. And to some degree, I have reworked all of these essays. Some required quite a bit of refining, while others required very little. What you'll find within this collection is my approach to various topics and issues within our Folkway. The Folkway that is the ancestral way-of-life of the Northern European people. The scope of these essays is wide and far-reaching, but this collection does not provide a comprehensive examination of Heathenry. If that is what you are seeking, you should buy Our Troth, Volumes 1 and 2. And This collection does not serve as a complete introduction to heathery. Essential Asatru, by Diana Paxton, would better serve you as an introduction to our Folkway. The ways of our Ancestors varied greatly from tribe to tribe, location to location, century to century, and even among various levels of society. And the same situation exists today. These essays are not presented as the only way things should be done within Heathenry. They represent one man's approach...one tribe's approach...to these issues and topics. It is likely that every reader will find things to both agree with and disagree with in the contents of this book. If nothing else, the essays will hopefully get you thinking about these topics...and examining, or re-examining, your own approaches and points-of-view. You will notice that these essays do not have footnotes. This collection of essays is not a research paper. There is nothing within these essays that I would consider contrary to what we find in the Lore, as I read and interpret it. But the content, the purpose, and the tone of these essays does not lend itself to a line by line scholarly justification and notes. Jotun's Bane Kindred draws from Norse, Germanic, Anglo-Saxon, and other Northern European sources for its ways and traditions. For this reason, there is a certain mixing of terminology in the following essays. We do not restrict ourselves to using only Norse terminology or only Anglo-Saxon terminology. If a word or concept accurately reflects what we are doing, then we use that word or concept. This collection is not an anti-Christian manifesto. Instead the tone is one of starting where our Ancestors left off, reclaiming what was taken from our people, and moving our religion forward into our modern world. Our kindred and these essays focus on moving beyond Christianity. But this necessitates a few essays on shedding the fear and indoctrination of the foreign religion under which so many of us were raised. An intelligent and practical man is always re-examining his beliefs and point-ofview. If something works well, he keeps it. If concepts or ideas come along that work better, then the man adjusts. Heathens are always reading, learning, and deepening their understanding of our Folkway...and I am no exception to this rule. So, its important to understand that these essays represent my opinions at this time. If my opinions change, future books or future editions of this book will reflect those changes. Jotun's Bane Kindred is an oathed tribal kindred, in the Heartland of America. We are a Folkish kindred, at least by our own estimation. And these essays do reflect a tribal approach to Heathenry. They reflect the importance of kindreds, with committed and hard-working leaders and members. And they reflect the importance of preserving, gathering, and advancing our Folk forward. This book would not exist if not for Jotun's Bane Kindred. We are a strong and growing tribe. We work to support and advance each other, and I would not be the man I am today, without the incredible individuals of worth that fill my Innangarth. Their thoughts and ideas run throughout these essays, culled from our discussions and efforts together, and the lessons we have learned working together as a tribe. The goal of this collection of essays is not to make money. The goal is to share information. So feel free to share or distribute this material however you wish, as long as you follow the restrictions described in the Open License on the inditia page. And finally, if you wish to contact me in order to discuss or ask questions about any of these writings, feel free to email me at markheathengods.com. Mark Ludwig Stinson December 2009. ...