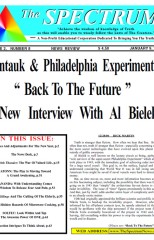 Montauk & Philadelphia Experiments: “ Back To The Future ” A New Interview With Al Bielek. 12/28/00 RICK MARTIN Truth is stranger than fiction. How often we hear that line. But more often than not, truth IS stranger than fiction—especially concerning some of the more secret technologies that have evolved upon this planet largely outside of public awareness. Al Bielek is well known on the lecture circuit as being, perhaps, the “sole survivor of the super-secret Philadelphia Experiment” which allegedly took place in 1943, with the immediate goal of achieving radar invisibility for a large naval vessel. This goal is, on the surface, logical and easy to understand considering that World War II was in full swing and many American lives might be saved if naval vessels were hard to detect by the enemy. But, as time moves on, more and more information becomes available on this fascinating subject, including the possibility that there was far more going on in 1943 than “simply” the at-that-time far-out desire to achieve radar invisibility. The issue of “time” figures prominently in this scenario. And that, just by itself, adds another entire layer of complexity and intrigue to an already exotic matter. FDR had originally appointed the brilliant scientist and prolific inventor, Nikola Tesla, to head-up the invisibility project. However, after being informed by his off-planet contacts (yes, he openly admitted it) that there would be problems with the ship personnel if the project went forward, Nikola Tesla eventually bowed-out of the project in 1942 and, before leaving, did everything within his power to stop the experiments he knew would end in disaster. ...