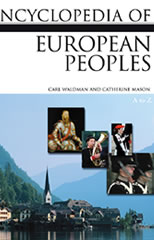 Preface. What constitutes a people? A group referred to as a people typically have one or more of the following in common: language, beliefs, sense of shared history and of common origin, political organization, institutions, territory and/or kinship. In a more specific sense, the term also can mean the enfranchised citizens of a state. As used in the Encyclopedia of European Peoples, the term people refers to different kinds of commonality as indicated. It refers to shared language. The Celts, Germanics, and Slavs are each an example of a language family—without any other defining characteristics—discussed as people. Groups of a shared language family and geography, such as the Celtspeaking Britons, Scots, and Irish in the British Isles and the Celtic-speaking Gauls in France and surrounding regions, also constitute a people for the purposes of the encyclopedia. Other peoples are defined as distinct groupings on the basis of shared culture apart from language. Peoples of differing languages and ancestry came to be defined as Greeks, Romans, and Byzantines (as language became more uniform over the ages). Thus a cultural group also might constitute a people. ...