Faurisson Robert - No documents, no history 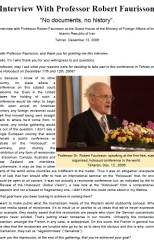 Author : Faurisson Robert
Title : No documents, no history Interview with Professor Robert Faurisson at the Guest House of the Ministry of Foreign Affairs of the Islamic Republic of Iran
Year : 2006

Hello Professor Faurisson, and thank you for granting me this interview. Hello. It‟s I who thank you for your willingness to put questions. Professor, may I ask what your reasons were for deciding to take part in this conference in Tehran on the Holocaust on December 11th and 12th, 2006? It‟s because I know of no other country, no place where a conference on this subject could welcome me. Even in the United States the holding of such a conference would be risky; to begin with, upon arrival on American territory any foreign revisionist could well find himself being sent straight back to where he‟d come from. In France, any similar gathering would be out of the question. I don‟t see a single European country that would tolerate a public conference or debate on the “Holocaust”. In Germany, your country, the prohibition of any form of revisionism is draconian. Canada, Australia and New Zealand are merciless. Furthermore, it may be that in other parts of the world some countries are indifferent to the matter. Thus it was an altogether unexpected bit of luck that Iran should offer to host an international seminar on the “Holocaust” that, for once, would be open to all comers. It was not actually a revisionist conference but, as indicated by the title (“Review of the Holocaust: Global Vision”), a new look at the “Holocaust” from a comprehensive viewpoint and not a biased or fragmentary one. I didn‟t think this could come about in my lifetime. What goal have you been looking to achieve in coming here? I want to make public what the mainstream media of the Western world stubbornly conceal. When those media speak of revisionists, it‟s to insult us or ascribe to us ideas that we‟ve never expressed. For example, they readily assert that the revisionists are people who claim the German concentration camps never existed. That‟s putting sheer nonsense in our mouths. Unhappily the nonsensical assertion, amongst the French in any case, is widespread. On this score, the French in general have the idea that the revisionists are lunatics who go so far as to deny the obvious and this is why, coining a barbarism, they call us “négationnistes” (“denialists”). Have you the impression, at the end of this gathering, that you’ve achieved your goal? ...