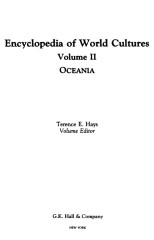 If you turn a globe just so, all you can see is the Pacific Ocean, the earth's largest geographic feature. Its estimated area of some 181 million square kilometers is greater than that of all of the world's land areas combined; however, even when Aus. tralia is included, the Pacific contains only about 9 million square kilometers of dry land. The rest consists of more than half ofthe world's volume of free water, with an average depth of over 4,000 meters and reaching depths over 10,600 meters in the Mariana Trench, just south of Guam. From the Bering Strait in the north to the Antarctic Circle is a distance of more than 14,700 kilometers, and to cross the Pacific at its greatest width, between Singapore and Panama, one must travel about 19,700 kilometers. A first impression of Oceania, then, is one of vast size and distances. ...