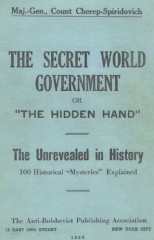 The Anti-Bolshevist Publishing Association. General Cherep-Spiridovich Extolled as Prophet IN SEVEN OF HIS PRE-WAR BOOKS ARE FOUND MORE THAN EIGHTY FAMOUS POLITICAL PROPHECIES ACCURATELY PREDICTED. QUOTATIONS BELOW, CONCERNING GEN. SPIRIDOVICH, EXPRESS THE ENTHUSIASTIC ENDORSEMENT OF THE MOST PROMINENT EUROPEAN EDITORS : "Spiridovich is the Slav Pope - Spiridovich is the Slav Bismarck" - acknowledged the "Russkoye Slovo," Russia's greatest paper . "Nothing has happened, nothing was told since 1914, that General Spiridovich did not foresee, foretell and repeat a hundred times with the fiery, passionate stubbornnesss, which is the distinguishing quality of the seers and prophets," ("L'Information," in Paris, on December 27, 1915) . "So Count Spiridovich prophesied exactly ten years ago. Few prophets have been more thoroughly justified than he . Today is the tenth anniversary of an astounding prophecy of his, which appeared on our pages, Dec . 19, 1908," (The Editor of the "Daily Graphic" on Dec. 19, 1918) . "General Cherep-Spiridovich has the credentials as a successful PROPHET" (the Editor of the "Financial News," on January 24, 1919) . "The XXth Century Prophet," a "PROPHETIC GENIUS," ("The Christian Commonwealth" in February, 1919) almost anyone who has visited this country. He has very definite ideas about what should be done to save the world from Bolshevism . The General should be consulted by those in authority. His profound and intimate knowledge should be at their service. His book, Towards Disaster," published in 1913, predicted what would happen in Russia in the event of a European War and this, like his other predictions, has shown that he possesses an uncanny intuition," (the Editor of the "Daily Chronicle," the famous Mr . Robert Donald, President of the British Empire's Press, in his own "The Yorkshire Observer," on April 25th, 1919) . "The accurate fulfilment of all the forecasts of Gen . Spiridovich gives to his advice a great weight . His foresight approaches the MIRACULOUS . His detailed knowledge of affairs and men would not be sufficient to explain this gift ." (M.Urbain Gohier, the brilliant Editor of La Vieille France," Paris, July 29, 1920) . "Count Spiridovich may justly claim to be the possessor of a faculty for foreseeing events in the political world, which entitles him to be called a PROPHET in all seriousness . His book, "Towards Disaster ; Dangers and Remedies" (1913), proved him to be possessed of a PRETERNATURAL intuition," (Lord Alfred Douglas, Editor of "Plain English" on Sept 25th, 1920) . "Count Cherep-Spiridovich is one of the best informed world politicians, whose sincerity and devotion to the truth no one can doubt. He has taught me more political history in a year than I had previously learned in my whole life, 62 years," (the Editor of the "Asiatic Review," on Dec. 3rd, 1920) . The late Ambassador of Italy, Baron Mayor de Planches, gave an interview in New York in April, 1907, when in "The New York Times," on Aprii 17, 1907, appeared the General's letter (foretelling the 2 Balkan and the World Wars) : "The United States had its Washington, the Italian Kingdoms were joined by Garibaldi ; Bismarck gave lasting unity to the German people, and now the Slav nations may have their hero. The appearance of a Slav Bismarck is imminent . The prediction is on every Slav tongue . But the conditions which such a liberator must fulfill are very difficult . Such a leader must answer six requirements . The only man who can meet all the six conditions is General, Count Spiridovich ." (The Town Topics, April, 1907) . "The General's writings bear evidence of a faculty of prevision which amounts to PROPHETIC GENIUS, entitles his utterances to the weightiest consideration," (the Editor of the "Asiatic Review" in Feb., 1919) . "General Count Cherep-Spiridovich was thoroughly well acquainted in the most intimate manner with all the undercurrents and intrigues of European politics," (the "New York Staats Zeitung" on April 29, 1921) . Some of Germany's newspapers implied that her failure was due to him . "General Spiridovich is the most inspired and fearless man alive today . And he has behind him the terrible record of prophetic warnings in the past, fulfilled," (the famous homeopath, Dr . John H . Clarke, Vice-Pres . of "The Britons," London). ...