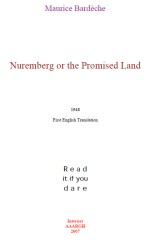 Maurice Bardèche’s Nuremberg or the Promised Land was the first extended critique of the Nuremberg Trial. For a Frenchman to criticize that trial and especially the French role in it in 1948 took great courage: the book was banned in France, copies of it were seized, and Bardèche in 1952 was sentenced to a year in prison, although he spent only a few weeks there before being pardoned. His criticisms of the Nuremberg Trial have since been repeated by many others. In fact, just two years later in a subsequent work, Nuremberg II ou les Faux Monnayeurs (Nuremberg II or the Counterfeiters), Bardèche was able to cite a long list of others who had likewise criticized the fairness of that trial. Yet Bardèche’s first book about Nuremberg remains something special, for it is much more than just a critique of the trial. It is the first work of Revisionism, and perhaps the only revisionist work that reads like great literature. It is a revisionist call-to-arms: it pleads for “history,” but recognizes that it is still too early for the history of the war to be written: emotions are running too high. It cries out for objectivity, but does so while simmering with passion. It does not merely refute lies, it spits venom at the liars. It may with some justice be viewed as a polemic. Bardèche himself in effect admits it: “I needed to write it: that is my only excuse for this indiscretion.” But if it is a polemic, it is also very far from being a mere rant. Most of the book is in fact a painstakingly logical “criticism of testimony,” specifically of the testimony produced by the French delegation at Nuremberg in support of the charge that during the occupation the Germans had tried to exterminate the French or, more exactly, had had a “will to exterminate.” The charge is absurd and Bardèche easily demonstrates its absurdity. But its absurdity is what makes him so upset: he cannot forgive the French delegation that it will allow a future “German historian” to show that “France lied.” Bardèche concentrates upon this part of the trial, however, not because the French were responsible for it and he is French but because it deals with events that he and his readers know firsthand and hence can judge whether the treatment of them at the trial was fair or not. He has heard reports about German atrocities in the East, about gas chambers, etc.; but about these things he reserves judgment. He wants evidence, and knows how easily reports are exaggerated and myths created. Bardèche’s book is a revisionist classic. It is not however, in my opinion, of interest today primarily because of its contribution to Revisionism nor because of anything it says about the past, but rather because of what it says about the future. Throughout the first three quarters of the book the discussion of the trial is interlaced with somber warnings and ominous admonitions to the reader: “One is proposing a future to us, one does so by condemning the past. It is into this future also that we want to see clearly. It is these principles that we would like to look at directly. For we already foresee that these new ethics refer to a strange universe, a universe with something sick about it, an elastic universe where our eyes no longer 26 recognize things.” The presence of these warnings and admonitions to the reader gives the book an oracular tone. Bardèche has examined the transcript of the Nuremberg Trial and now, like an ancient prophet after examining the entrails of a sacrifice, he has bad news to deliver and knows that others will not want to hear him. Indeed, very few have been willing to hear him. The last quarter of the book is devoted entirely to an exposition of what the future will bring. That anyone in 1948 could have foreseen so accurately our modern world is to me astounding. Bardèche recognized that the judicial travesty at Nuremberg was not simply an act of vengeance by victors against the vanquished and that what was on trial there was not just the particular German defendants, nor the German nation, nor even National Socialism, but rather nationalism itself: the idea that a people own the land that they have long lived in and have the right to live in it as they wish and to exclude others from living in it if they so wish. It is nationalism in any form which was condemned at Nuremberg. ...