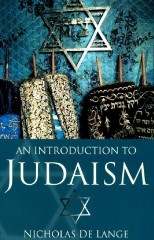 Beginning with the question ‘Who is a Jew?’, this book proceeds to offer a lucid account of Judaism and the Jewish people.Written for Jews and non-Jews alike, be they students or teachers or general interested readers, the book brings out the extraordinary richness and variety of Judaism: its historical depth, and the vigour and at times amazing endurance of its traditions – in the home, in the synagogue, in its literature, in individual and community life. Nicholas de Lange writes as a Jewish scholar, a knowledgeable insider, explaining the history and details of inherited rituals and customs; of organised religion (be it Orthodox, Conservative, Reform or Liberal); of concepts such as Zionism, Diaspora, Messianism. Half of the world’s Jews live in North America and the rest are widely scattered, and the book is sensitive to the global context of Judaism, both historically and in our postmodern age. The philosophy and theology of Judaism are examined, particularly in the wake of the Holocaust, and there are speculations on the future. Dr de Lange does not shirk the difficulties posed by questions of Jewish identity and by some of the irreconcilable differences which exist within Judaism as well as between Judaism and other cultures. An Introduction to Judaism contains illustrative tables and maps, a full glossary, chronology, bibliography and index, and can be used for reference, to check details and dates, as well as read consecutively or dipped into at leisure. This is a stimulating and comprehensive introduction to a major world culture. Nicholas de Lange is Reader in Hebrew and Jewish Studies in the University of Cambridge. A distinguished scholar and translator and a rabbi, he is author of the popular Atlas of the Jewish World and Judaism. His many translations include novels by Israeli writers such as Amos Oz and A. B. Yehoshua. With Cambridge, Dr de Lange has published Origen and the Jews and the English translation of Oz’s Under this Blazing Light. ...