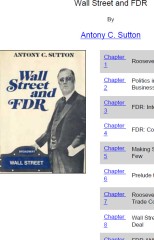 ANTONY C. SUTTON was born in London in 1925 and educated at the universities of London, Gottingen, and California. A citizen of the United States since 1962, he was a Research Fellow at the Hoover Institution for War, Revolution and Peace at Stanford, California from 1968 to 1973, where he produced the monumental three-volume study, Western Technology and Soviet Economic Development. In 1974, Professor Sutton completed National Suicide: Military Aid to the Soviet Union, a best-selling study of Western, primarily American, technological and financial assistance to the U.S.S.R. Wall Street and the Rise of Hitler is his fourth book exposing the role of American corporate insiders in financing international socialism. The two other books in this series are Wall Street and the Bolshevik Revolution and Wall Street and FDR. Professor Sutton has contributed articles to Human Events, The Review of the News, Triumph, Ordnance, National Review, and many other journals. He is currently working on a two-part study of the Federal Reserve System and the manipulation of the U.S. economic system. Married and the father of two daughters, he lived in California. ...